The rising trend in internet banking

Technology is evolving at break neck speeds today with a focus on making life easier. By being successful in this, technology has made the society dependent on it. One of the best examples of this is the pivotal role that smartphones, PCs, and laptops play in a person’s life today compared to the 1990’s or early 2000’s timeline. From 2010 onward, the one industry in the UK that has experienced a definite boom in this aspect is the banking sector.

The Office for National Statistics in the UK recently published an article that showed a steady rise in Internet Banking usage. From just 30% in 2007, the current statistics now show double the amount of Internet banking users as of 2016. This not only shows that most users are following the general trend in proclivity towards ease of banking and end user conveniences but also the dependence on technology that our generation has. However technological evolution is still not done and the next quantum leap in finance is biometric banking in the United Kingdom. 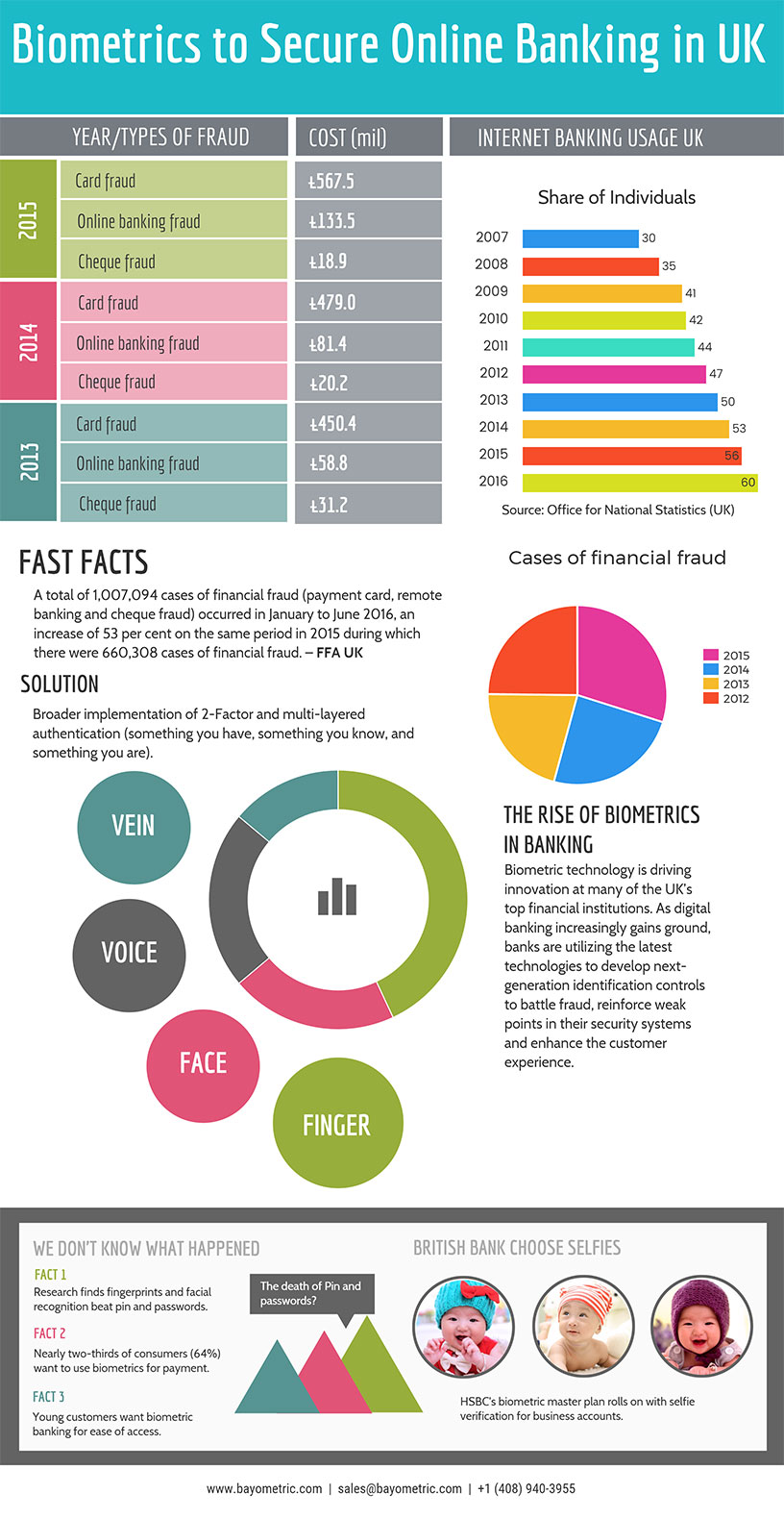 Add this infographic to your site by copying this code

But what are the consequences of convenience?

While the rise in Internet Banking is certainly a positive trend, it does pose a serious question to the banking sector, how safe is Internet banking today?

The answer to this lies in financial journals published over the last year. Financial fraud in terms of online banking happens in 3 ways:

With the rise in dependence on technology, there has been a manifold rise in fraud and the exponential rate it is following is a source of great pandemonium in the financial sector. While PIN and passwords are today’s ultimate protection, it has not stopped a total of 1,007,094 cases of financial fraud being registered over the first six months of 2016. The worst part is that during the same period in 2015, only half the number was reported.

The latest recorded figures due to the bellicose actions of fraudsters have touched a total of $ 720,000,000 in 2015 as costs incurred due to Card Fraud, Online banking fraud, and Cheque Fraud. The FFA in the UK is the nation’s answer to the growing threat of financial terrorism, and the latest norms adopted gives great prominence to the use of biometrics in online banking.

The potential of biometric technology in online banking

Though PINS and passwords do offer a great level of security at a penultimate level, the ultimate answer to unique security lies in the uniqueness of a user’s identity. The use of biometrics in banking security leverages exactly this- the unique genetics of every person on the planet.

Biometrics in the UK banking sector is what is driving the next generation of innovations when it comes to dedicated user IDs and passwords. The notion of using biometrics in payments is widely accepted by the banking as well as consumer community. 64% of the existing client base wants to use biometrics in banking with almost all the young consumers citing reasons such as ease of banking to back this unanimous shout out.

So what is biometric banking?

Biometric banking is the use of biometric factors such as fingerprints, voice recognition, facial recognition and veins as a part of a multi-layer security system that has virtually zero vulnerability. With the need for unified payments interface and other banking norms in the rise, the need for foolproof technology is growing imminent to curb the eminent threat of cyber terrorism and financial fraud.

The fact that biometric identities of people such as veins and fingerprints are not so easy to duplicate is an encouraging thing. However what makes Biometric security truly foolproof is the ease with which fake biometric factors can be identified, while tracing a hacker who enters the right password is almost impossible. This is one of the many biometric payment system advantages.

Adoption of biometrics by UK banks

A multilayered security system that not only relies on PINs and passwords but also the unique identity signatures of individuals makes it formidable. There are now innovations that use a serial ID to first identify the user and then a PIN password and a biometric factor for authentication before logging in for financial transactions.

With banks being trusted more than the government for safe keeping by the people according to Visa’s latest survey, it is no surprise that banks have already started implementing biometric factors for security in one form or the other.

HSBC is one of the banks in the forefronts of implementing biometric technology as an authentication factor. In its Biometric master plan, HSBC has introduced the use of selfies for business accounts and transactions as one of the multi-factor authentications.

Technological giants such as Apple have already implemented biometrics in finance through the Apple pay biometrics technology. The proven success in security will not only hasten the implementation of this in all commercial banks but will also validate its need.